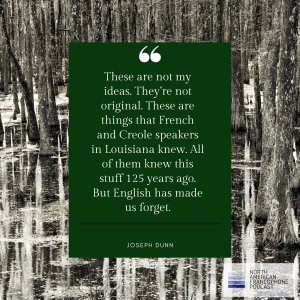 As someone who has studied Louisiana’s French and Creole language populations for more than two decades, I have come to understand that you cannot be a good historian or researcher if you are not open to discovering and accepting new information, even if it challenges you to completely change your beliefs about a particular subject or topic.

In this, LANGUAGE, CONTEXT, and PERSPECTIVE are critical.

In English, you learn the “Louisiana Purchase.” Yet, in French, my and many of your ancestors experienced “La Vente de la Louisiane” — the SALE of Louisiana.

I was told that French was only an “oral language” in Louisiana, when in fact, French language newspapers and literature, authored and consumed by both white and black people flourished up until the early 20th century.

I was told that Creoles were black and Cajuns were white, yet Creoles historically came in all colors and backgrounds and the defining characteristic of their créolité was not their skin color, but their language… and I also discovered that first and second and third generation Acadians born in Louisiana were also categorised in official documents as “Creole.”

I learned in school that the Harlem Renaissance was the first great Black American literary movement, when in fact Creoles of color were publishing prose, poetry, and newspapers IN FRENCH nearly a century earlier. (Check out Armand Lanusse and Les Cenelles)

I was taught that Rosa Parks sparked the Civil Rights movement in 1955, when in fact Charles Roudanez published the first newspaper BY people of color FOR people of color in French in 1861 calling for equal rights for black people and the Comité de Citoyens recruited French-speaking Homère Plessy to board a train in 1894.

I was told that Louisiana French speakers were incomprehensible by Francophones elsewhere, yet black and white men from Louisiana served as spies and interpreters in France, Belgium and North Africa during WWI and WW2.

You see, since French-language schools were taken away from us in 1921, we have been reprogrammed in English to think of French as a “foreign language,” when in fact English was historically the foreign language for many people in Louisiana up until the mid-20th century.

We have been institutionally racially segregated from people who share our same heritage languages, foodways, music and broader culture.

As an example : if you give a white person and a black person the very same black pot, the same ingredients and the same recipe for gombo,

no matter that it was cooked the same way and tastes identical.

This confusion also extends to our heritage languages because

due to the racialisation of our society, which means that ethno-racial-genealogical identity is often *not* synonymous with language spoken.

This is a direct result of assimilation and forced Americanization.

Our common and unique Louisiana identity has been expressly DECONSTRUCTED.

I know and understand how very difficult it can be to accept that what someone has always believed may not be true or that there may be another filter through which to view a topic — these debates often get way too personal — but the Louisiana experience is VERY complex and is not easily understood ONLY from a projected English-speaking American perspective.

When I and others bring different points of view or primary source documentation to discussion groups, it is NOT to appear pretentious or condescending, it is to share information that we have discovered, translated, contextualised, examined and really, really thought about.

Just a Louisiana guy writing stories as they happen to me. View all posts by francolouisianais